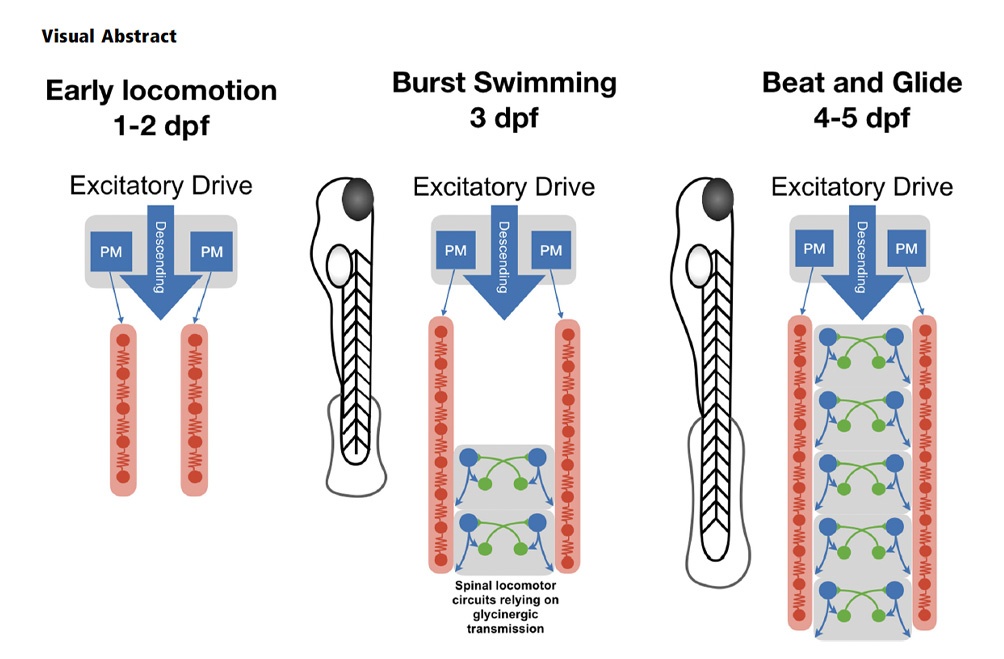 Significant maturation of swimming in zebrafish (Danio rerio) occurs within the first few days of life when fish transition from coiling movements to burst swimming and then to beat-and-glide swimming. This maturation occurs against a backdrop of numerous developmental changes – neurogenesis, a transition from predominantly electrical to chemical-based neurotransmission, and refinement of intrinsic properties. There is evidence that spinal locomotor circuits undergo fundamental changes as the zebrafish transitions from burst to beat-and-glide swimming. Our electrophysiological recordings confirm that the operation of spinal locomotor circuits becomes increasingly reliant on glycinergic neurotransmission for rhythmogenesis governing the rhythm of tail beats. This transition occurred at the same time that we observed a change in rhythmicity of synaptic inhibition to spinal motoneurons (MNs). When we examined whether the transition from weakly to strongly glycinergic dependent rhythmogenesis occurred at a uniform pace across the length of the spinal cord, we found that this transition occurred earlier at caudal segments than at rostral segments of the spinal cord. Furthermore, while this rhythmogenic transition occurred when fish transition from burst swimming to beat-and-glide swimming, these two transitions were not interdependent. These results suggest that there is a developmental transition in the operation of spinal locomotor circuits that is gradually set in place in the spinal cord in a caudo-rostral temporal sequence.